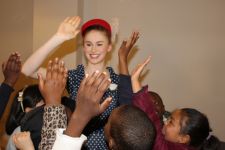 It would have proved quite a feat for Nanny McPhee to quieten the enthusiastic roars of laughter at LCB’s schools’ matinee, which took place on 24th April 2014. When the doors opened for the noon performance, almost 1000 children from 19 inner city primary schools flooded into the theatre and were captivated by the pranks and antics of the naughty Brown children from start to finish. For most, this was their first experience of ballet and for some, their first ever experience of live theatre. As the curtain fell, shouts of ‘THAT WAS AWESOME’ echoed throughout the theatre. After meeting the dancers in the foyer, the throngs of children desperately tried to steal one last glimpse of Nanny McPhee, Evangeline and the Puppies as their teachers ushered them away.

The following day, groups and families from 47 charities made their way from across London and some from even further to the Peacock Theatre. With most coming from charities supporting the elderly and children with disabilities, the mixed and diverse audience was particularly appreciative of the £1 tickets.

Following the success of Ballet for £1, the LCB team are taking free half-day workshops into primary schools who saw the ballet, giving them the chance to try out the dance steps and try on the costumes for themselves. Shortly after, LCB’s Touring Companies will be taking an adapted version of Nanny McPhee to care homes for the elderly and SEN schools.

“It is such a great way to introduce the children to ballet and it is invaluable for them to see children with similar backgrounds to themselves performing on stage. It has been lovely to see the boys/girls who groaned and moaned at the idea of going to the ballet change their minds and become inspired by it. Many children in the class went from having a negative view on ballet to saying they would like to start classes which I hope they will do after they have tried it out with the teachers.”

“We took 13 families to the ballet. Every family has a child with a heart condition. Some are life threatening but some can have surgery and go on to lead “normal” lives. We had families travel from Devon and Cardiff to attend this event. They loved having an excuse to come into London. We had one little girl who is sadly in a hospice and she came out for the day as her mum is building a “memory bank” – the little girl had such an amazing time and was transfixed throughout the entire performance. This event is such a treat for parents, children, carers and siblings – it includes the entire family and charity. We are just so grateful to the funders for keeping this event every year. It is always so popular with our beneficiaries.”