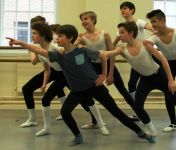 When I arrived at the first rehearsal session I was nervous because I was the first boy to arrive so when I walked into the waiting room it was completely filled with girls.  But then another boy called Hugh turned up and I started talking with him and he did LCB last year and he told me about how he really enjoyed it.  I also met a boy called Jamie who I really like and he did it last year as well.  Most of us are new this year though.

For the first rehearsal we did party entertainers which is in scene 5, or it might be scene 6 I’m not sure.  It’s a really fun dance and I like the choreographers, Jenna and Amy.  They demonstrate each move and we copy.

When we weren’t needed for rehearsal we played outside - British bull dog, football, it, dodge ball, splat and stuck in the mud.  We all got our LCB T’shirts and they took photos for the programme.  We had to put vaseline on our lips so they don’t get lost in the photo.

Doing a whole week of LCB meant that I got to know all the other people in the show and the people teaching us much better.  They’re all really nice but some of the teachers are quite strict, which I like because it means that people don’t muck about much.

At the end of the week I got a lift back home with one of the bigger boys in the dance, Casper, because he lives near me. I got to know him better.  On the journey home we listened to music and played cards.  Casper’s really funny and a really good dancer.

On Wednesday I fell out of a tree and lost consciousness.  I got concussion and amnesia for a bit.  I slept a lot and had to stay in bed all week and then some more after that.

On Sunday I went up to London to watch the rehearsal I should have been doing.

First I got to watch a run through of the whole of Act 1.  I’d never seen it before because usually I’m sitting at the back quietly waiting for when it’s my turn to dance at the end (and we’re chatting quietly).  One of my favourite scenes is the opening scene; it’s very dramatic.

Seeing it from a different angle because I was watching at the front and not doing it, I realised that some of the dancers look down, which makes a huge difference.  It makes them look unconfident and like they’re trying not to be seen.  When you’re on stage you shouldn’t try to be invisible but be the biggest person you can.  Dance teachers always go on about “Look up and smile” - I always thought that was stupid just while you’re practising but now I realise how much of a difference it makes.

Some were really acting, they became their character and seemed to be really feeling the emotions.  For example Snow White’s step mother put everything she had into it. I noticed that some people looked like they were really enjoying what they were doing; It’s made me wonder what I look like when I’m dancing.

After the run through of Act 1 we moved on to rehearsing newer scenes with the King’s Huntsmen.  I was worried that if I didn’t come I’d be missing new choreography and that I would be missed out of the scene or be tucked in the back.  Instead I was able to walk through the routine and be placed even though I couldn’t dance it. My Mum nearly didn’t bring me because she was worried about me recovering properly from the concussion - I’m so glad that I went.