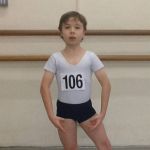 The first audition for Little Lord Fauntleroy had come! I had been waiting for this day since April 26th 2015 – the day Snow White ended. When I walked into the audition room, I felt so nervous seeing all the amazing dancers. I had never seen such a large group of boys at an audition before. This first audition was lots of fun, and I was delighted when I found out I’d got through to the second round.

Two weeks later the second audition took place and I found it a lot more difficult. I tripped over a couple of times and was really worried that I hadn’t got in. But I loved learning the new choreography with Jenna and Amy. When it was over, I said goodbye and good luck to my new friends and hoped that we would meet again at casting. A few days later the email arrived saying I had made the Company! I felt overwhelmed with excitement and incredibly lucky. Just two weeks to wait until Casting Day!

Casting Day was so exciting! I got to learn choreography for three different parts and they were all fantastic. Although I was hoping I might get the part of Little Lord Fauntleroy (Cedric), I thought that it would be an almost impossible achievement as there were so many other talented boys. But as soon as I started to learn his dance, I felt like I was Cedric. Thinking about the boys I had met in the earlier audition rounds, I felt a little sad about not seeing some of my friends who hadn’t made it into the Company. But overall it was an amazing day. Fingers crossed!

When I found out I’d got the part I’d been dreaming of, I froze like a statue and then jumped around the room like a lunatic! I quickly phoned my grandparents and ballet teachers and they were so excited! Now I had to wait a few weeks to start rehearsals – it was like holding my breath for the whole of the Christmas holidays!