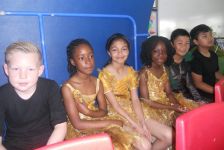 After a year of LCB’s Dance Inspire weekly ballet classes, Year 4 of South Rise Primary had the opportunity to showcase their newfound talents to their teachers and parents at their end of year ballet show.

With only a few moments before parents started to arrive, the children hurriedly added the finishing touches to their costumes and make-up (some of the boys grumbling that the girls’ costumes were more sparkly than theirs!) and they wished each other good luck – “toi, toi, toi!” Soon every seat in the hall was filled and they were ready to begin…

The audience was treated to an exciting triple bill with scenes from The Secret Garden, Rumplestiltskin and The Scarlet Pimpernel. From the gallant fighting scenes in France to the magical blossoming of the secret garden, the children enthusiastically applauded their peers and eagerly waited for their own turn. Narrating parts of the story for the audience and using their acting skills too, the stories were told beautifully. As a surprise finale, the all-boys spider corps from the haystacks in Rumplestiltskin performed to the Spider-Man soundtrack!

The children proudly took their final bows, teachers reflected on how much they had developed over the year and their beaming parents took a few last snaps to remember their achievement. Whilst packing away their costumes and props, the children suddenly realised that their year of ballet had come to an end – it’s no surprise that one boy sweetly asked “please can we do it all again?”