Sofia: Wishing for a snowflake 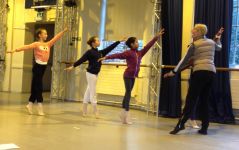 Hi! I’m Sofia and I am really excited to be chosen for this year’s LCB production of Snow White!  LCB is such a friendly company and I’m so glad to be part of it – for a second time as well. I have been watching the productions since I was six and from that day on, I had made it my goal to be on that stage... and my dream came true!

Before the auditions I was feeling a bit nervous, but as soon as I got there I realised that there was nothing to be scared of - everyone was really friendly and all the girls and boys were kind.

I was so relieved when a lady told me I was recalled! So I had to go to another audition. After the audition I heard someone say that we would hear the results within a week - ages!

It came round sooner than I thought but after a week, there was no letter! So I had to wait another couple of days ‘til the letter came. Anyway, I was very happy when I heard I’d got final audition! So the following Sunday I went to the dance attic with all the other lucky boys and girls who had got this far. Anyway, I heard in a week and I was so excited to be in Snow White! The casting was really fun – we learnt the dance of: Little Snow White; a Snowflake and the Jester. I really wanted to be a snowflake. I also made lots of new friends.

And when the cast list came, I couldn’t have been happier with the parts I had been given (although I was secretly wishing to be Snow White - as I'm sure everyone was!!). I am a Snowflake, a Dancing Class Friend and a Party Child. I couldn’t wait to start rehearsals in the New Year.

My first rehearsal was so much fun! Jenna and Amy were very kind and taught the dances really well. We learnt the Snowflake dance and the Dancing Class scene. I even got to see my Snowflake costume! It was so beautiful! It was ivory-white with a pretty puffy white skirt and a silver head dress. We even had to wear white ballet shoes instead of the usual pink!

Rehearsals with LCB have been so much fun and I can’t wait for more!

Sixty children were chosen from over 500 young hopefuls to be part of the LCB’s 2014 season. Now they are working together, week in, week out, to create a stunning West End production of Nanny McPhee. In their own words, LCB’s young dancers share the highs and lows of this exciting, life-changing experience.