Annabelle: Hoping for a good role... 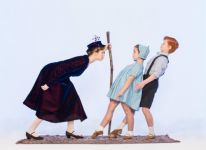 About 2 weeks after the final audition, we returned to the Dance Attic for the Casting session.  Us girls aged 13-14 were in for a long day, as our session was from 9.30am to 5.30pm. I was so nervous for this day, as it would decide our parts.  The top age range tend to get some of the more ‘adult’ parts (including Nanny McPhee), and as we are all a fairly tall bunch of girls, we all stood a good chance with many of the main female roles – so…….fingers crossed……we started.  Our first casting was for the cook – a strong character who had been a cook during the war – so the dance was very military and upright – I really enjoyed this one.  Then came casting for Aunt Adelaide…….the old lady who funds the Brown household – she’s very short-sighted and very posh, and also quite batty!  A great character to perform.  I tried to capture how an older lady would move, but still keep some of the starchy stiffness of a very ‘proper’ lady.  I wanted to make sure that how I portrayed the character bought out her different aspects so that the ‘audience’ knew who she was.  I really enjoyed that one.

Then came Nanny McPhee.  The first casting didn’t involve much dancing so I wanted to try and make the most of my facial expressions to bring her character to life and also use my body language to tell a story.  This was hard work but good fun, and a great experience.  We first worked on the scene where the children pretend to be ill, so Nanny McPhee bangs her stick and the children do actually begin to feel unwell……..and as Nanny McPhee, I had to give them medicine.  I had to think how Nanny McPhee would stand and move and look to command attention.  This wasn’t hard from a dance point of view, but it was challenging artistically – and I loved doing it.

We also got to watch some of the boys auditioning – we watched ‘Mr Brown’ and ‘Simon’ which was great, because we got to be nosey and see who else was in the company and also see the different types of choreography and characters.

Our next casting role was for ‘Magic’, and some of these dances we had already done during our previous auditions.  It was sparky, and quick footed and had an almost light, playful feel.

By now, we were approaching the end of the day, and I thought it was almost time to go home, but there was one more scene to go through. This was between Nanny McPhee and Simon – I was put with a boy called James.  It was the scene where Simon comes to Nanny McPhee for help to stop him marrying the awful Mrs Quickly (the soon to be Stepmum).  Nanny McPhee says she can’t help him but he can do something if he’s willing to accept the consequences.  It’s quite a slow and sad scene, but again didn’t involve too much movement, so I felt Erico was looking for how I responded to James’ acting and he gave us pointers.  We danced together, and I thought it went quite well, and that was that really.  On our way home, I told Mum that we had danced for the roles of Cook, Aunt Adelaide, Magic & Nanny McPhee – we were so excited - Mum bought me a hot chocolate as an added bonus!!

Waiting for the provisional cast email was the longest wait of all ….. poor Mum had to put up with a whole 9 days of me asking “anything yet”.  Every single minute of every day, in every class at school I was thinking “I really want to know, I really want to know”.  It was Tuesday and I had just finished my tap class at Laine in the evening, and my Mum rang me (she never rings me at Laine).  I answered the phone and Mum said “Hello Nanny McPhee” and I burst into tears with excitement!  I kept asking “really? Really? Really? Is it true?”, and my best friend Jemma was in the changing room with me and wanted to know what had happened – when I told her, she started crying too!!! I was so excited, and I couldn’t wait for rehearsals to start as I just wanted to get going.